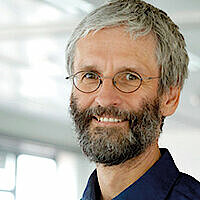 Thomas J. Jentsch studied both medicine and physics at the FU Berlin. After having obtained doctoral degrees in both areas, he did postdoctoral research in transport physiology in Berlin and molecular cell biology with Harvey Lodish at the Whitehead Institute/MIT. In 1988, he was a founding member of the Center for Molecular Neurobiology Hamburg (ZMNH), where he made his first seminal discoveries. In 2006 he moved his lab to Berlin, joining the FMP and MDC. Thomas Jentsch’s research is concerned with ion transport in the broadest sense. He is arguably the world leader in the field of chloride transport.

'My lab is broadly interested in ion transport processes. Our research spans the whole spectrum from newly identifying ‘novel’ ion channels to studying how their structure determines biophysical transport properties, to determining their role in cellular and organismal processes. Besides plasma membrane channels, we elucidate the roles of ion transport in intracellular organelles. A strong focus is on the role of ion transport in physiology and disease, which we address with genetic mouse models and human genetics.

We are particularly interested in anion channels. We discovered, for the first time, the CLC family of anion channels and transporters (1990), the molecular identities of volume-regulated VRAC/LRRC8 anion channels (2014) and of acid-activated ASOR/TMEM206 Cl channels (2019). We discovered and/or analyzed the roles of CLCs in myotonia, kidney stones, osteopetrosis, neurodegeneration, leukodystrophy, blindness, deafness, infertility, renal salt loss and aldosteronism.

We also discovered all four neuronal Kv7 K channels (KCNQ2-KCNQ5), their role in epilepsy and deafness, and studied the (patho-)physiology of the K-Cl cotransporters KCC2, -3, and -4 using mouse models.’

International Prize for Translational Neuroscience of the Gertrud-Reemtsma Foundation
1999

Elected Member of the Academia Europaea
2000

Founding member of the Akademie der Wissenschaften in Hamburg
2006