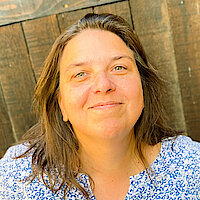 Katta was born in West Berlin into an original Berlin family.  After a professional training in a large law firm, she thought that studying law would be a good idea. But it wasn't...
Even a change to archaeology wasn't much better, so she gave up studying and took other paths.
She has been working for Christian since 2008 and moved with him from FU Berlin to FMP in 2013.
Katta only has a part-time job because otherwise she wouldn't have enough time for all her other interests. In addition to her hobbies of sewing, scouting and softball, she is involved in raising awareness for people with Down syndrome because her daughter is affected by it.